The three Democratic candidates for President of the United States had another chance over the weekend to lay out their plans for US-Russia relations.

“This is a war for the soul of Islam. The troops on the ground should not be American troops; they should be Muslim troops. I believe that countries like Saudi Arabia and Qatar have got to step up to the plate, have got to contribute the money that we need and the troops we need to destroy ISIS with American support.”

This is a sentiment that has been in American minds for a while -some Americans wonder why the United States has to fight battles halfway across the world when substantial military powers, such as Saudi Arabia and Turkey, have these threats at a much closer proximity.

But Sanders’ idea is still a bit faulty. There is already an international coalition to fight against the vile terrorists still controlling large swaths of Iraq and Syria, but it is a deeply divided band of groups fighting the terrorists in Syria, both inside Syria and outside it. A recent political cartoon from The Salt Lake Tribune shows Presidents Obama and Hollande observing the “anti-ISIS coalition,” which consists of multiple different heads of state, including President Putin, pointing pistols at each other. 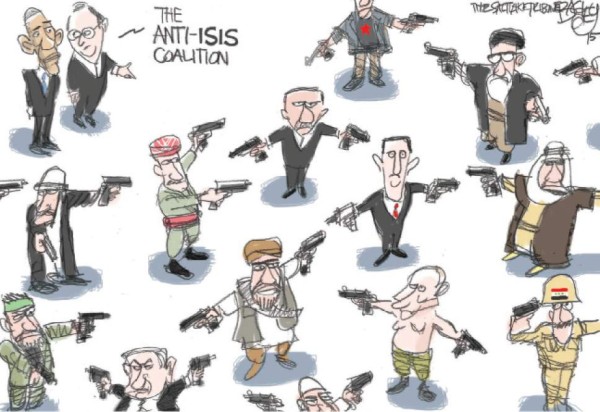 The disagreements and divisions in this coalition are numerous. Turkey and Russia are at odds because of the Russian plane shot down by the Turkish Air Force. The United States, Saudi Arabia, and Turkey do not want Bashar Al-Assad to stay in power while Russia and Iran do. Disagreements regarding the Kurdish minorities in Iraq, Syria, and Turkey have come to the forefront as well.

Sanders was quickly questioned as the debate moderator told him that has happened many times before and asked him about a plan B if his approach proved unsuccessful, to which Sanders stuck to his guns and argued that his plan would work provided wealthy countries such as Saudi Arabia and Qatar contributed to their potential.

The problem here is that Saudi Arabia, in particular, has been criticized for its widespread export of Wahhabi Islam-a fundamentalist sect of Islam. Its human rights record is one of the worst in the world and non-Muslims are not allowed to practice their religion openly in Saudi Arabia.

Clinton, like some of her Republican counterparts, advocated for a no-fly-zone over Syria in order to “gain some leverage” with Russia, but unlike some of the Republicans, she shied away from the question that followed – whether she would shoot down a Russian plane, claiming that it would not come to that.

The reality is that a no-fly zone, while it could, like Clinton said, provide a safe haven for people fleeing violence is a serious risk. But if Russia doesn’t approve of it like Clinton suggested they might citing an agreement made in Geneva a few days ago with the supervision of the UN, it would only exacerbate tensions where they are already high.

The other issue dividing Russia and the US in Syria is Assad and whether he will stay in power in Syria. Since the Russian intervention, Syrian President Bashar Al-Assad has seen his position in power, though still uncertain, strengthen. Forces loyal to his government are slowly but surely gaining ground, much to the chagrin of Turkey, the United States, and much of the Arab world but to the relief of Iraq and Iran.

It cannot be forgotten that Assad’s violence against his people has been one of the main reasons that what began as a peaceful uprising became a civil war. The brutality of Da’esh has overshadowed his crimes and allowed him to stay as an alternative to the fractured opposition, and it is still very unclear as to who will run post-war Syria.

Sanders seemed less interested in replacing Assad than Clinton, citing the multiple recent revolutions that ended in instability and violence in the Middle East, namely, Libya and Yemen.

It is a difficult tightrope to walk in Syria, and there are very few sides in the Syrian conflict that seem to be approved of by all parties. And there is still almost a year until the presidential election, meaning the conflict in Syria could look much different as the election draws closer – we can only hope it improves.