A section of Russian analysts view the political potential for protests in Russia in the near future with scepticism: in the conditions of an economic crisis, Russians- adapting to the crisis – prefer to occupy themselves with vegetable gardens rather than with demonstrations.

According to other commentators, in Russia the rulers are traditionally removed by elites (as a result of a coup d’état), rather than by popular uprisings. Coups themselves, however, often perform the function of social protests. So, in an analysis of the ousting of presidents of southern American countries from the end of the 1970s, Kathryn Hochstetler concluded that, in all presidential impeachment cases, the parliament was successful only in the event of large-scale street protests. Were parliament to attempt to act alone – removing the president would be unsuccessful. Therefore, as a minimum, widespread social unrest is a necessary condition for a coup.

Meanwhile, the number of protests in Russia has been rising, at least, since 2014. According to data collected by the Center for Social Work Rights, in 2015 409 separate protests were recorded in Russia (including the truckers’ protests). That is 40% more than in 2014, during which record numbers of protests already took place. The average rate of increase in protests increased from 6% in 2014 to 10.5% in 2015. However, according to data from the Center for Economic and Political Reforms, in comparison with the protests of 2011- 12, the current protests are mainly of an economic nature and shift towards the poorly paid and unemployed. The protesters are pushing strictly economic demands and are trying to distance themselves from the political agenda. Does this mean that there is no political threat to the Kremlin?

The answer to this question has two parts. The first part is linked to the specifics of the Russian authorities’ support. Political analyst at UCLA, Daniel Treisman, convincingly showed even in 2009 that the ratings of Russian presidents in the 1990s and 2000s – Boris Yeltsin and Vladimir Putin – consistently correlated with objective economic indicators of Russia’s development and with Russian citizens’ assessments of their own economic well-being. In this sense, Russians quite rationally approve of regimes under which their well-being improves.

This dependence of the ratings on the economy, with certain caveats, continues today. In 2011- 2012, Putin’s ratings fell, despite the fact that assessments of Russia’s economic situation continued to improve. 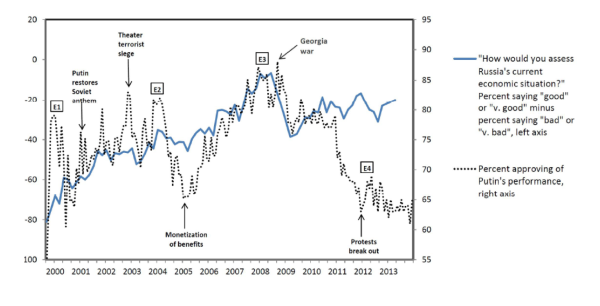 But recently, the link between these two indexes is once again noticeable. As Denis Volkov, a sociologist at the Levada Center, notes, following an improvement in the first half of 2015, assessments of the economic situation began to worsen from the middle of summer, and towards the end of 2015 approached the lows of 2014’s “black December”. Parallel to the fall in assessments of the economic situation, a fall in the president’s ratings was observed: Putin’s approval rating dropped from 88% in October 2014 to 82% in January 2016.

The second part of the answer is linked to the specifics of the current Russian regime. As noted earlier, the Russian neopatrimonial political regime is close in its particularities to the regimes of Equatorial Africa (e.g. Zambia, Zimbabwe, Kenya, Malawi, Nigeria), which are characterised by the sole control of a “big man”, systematic clientelism underpinning their political support, weak institutionalisation and blurred boundaries between private and state resources. In neopatrimonial systems, the ruling leader or clan holds on to power with the help of a system of personal patronage based on informal loyalty networks and personal connections, and not through ideology or law. Political analysts Michael Bratton and Nicholas van de Walle say that economic crises are particularly threatening to the survival of such systems, as neopatrimonial leaders usually retain the loyalty of broad sections of the population (in the case of Russia, the bureaucracy, security agencies, pensioners etc) almost exclusively through the redistribution of economic rent. Indeed, the close link between the authorities’ ratings and Russians’ assessments of their economic well-being, as well as visible electoral cycles of the Putin system, are partly linked to the redistributive nature of the system. Accordingly, the protracted economic crisis is depriving the regime of the possibility of further buying the loyalty of broad sections of the population.

In neopatrimonial systems, a protracted economic crisis leads to instances of isolated, sporadic and purely economic protests, which do not initially push any political aims. Often the protests arise as a result of a regime’s specific novelties which infringe upon the material interests of separate groups, and usually focus on a one-time improvement in the well-being of a particular group of protesters, and not on systematic political changes (an example of such groups – students who protest against the reduction of the size of state scholarships in Benin or the shortage of teachers in Niger). Since the initial wave of protest seems insignificant and ad hoc, rulers usually underestimate their importance. But, little by little, the protests become more and more politicized, and, more often, more important groups of the population join them. So in Zambia, the protests by administrative workers beginning in 1985 were gradually joined by doctors and nurses, which led to a wave of major public sector strikes. It was the same in Russia in 2009-2010: in Vladivostok and Kaliningrad, for example, protests began with an economic agenda, and ended with a political one. A similar trend was observed in Ukraine on the eve of Maidan in 2014. First wave protests emerged exclusively in cities and did not have any clearly defined organisers or leaders.

Regimes in Equatorial Africa attempted to suppress protests in their initial stage either with the help of repression, or by way of making small concessions (such as in the case of the Russian truckers’ protests). Repressions were more often applied to protests with a clear political agenda, but economic handouts were more effective for suppressing protests. However, in the context of an economic crisis, the population’s discontent grew increasingly, depleting the authorities’ reserves to flood problem areas with money so that, within a couple of years, the protests usually acquired a political agenda. The protesters gradually began to link their economic demands with corruption in the upper echelons of government and the inefficiency of the country’s management. For example, protesters in the Democratic Republic of the Congo accused President Mobutu Sese Seko of dishonestly acquiring wealth held in Swiss bank accounts. In the Ivory Coast the construction of the Basilica of Yamoussoukro in the president’s home village, a gold-plated copy of St Peter’s Basilica in Rome which cost an incredible US$ 145 million – became the object of criticism. Gradually the protests led against individual politicians took on a pro-democracy focus, and often led to the liberalization of the regime.

The current sporadic protests in Russia are strongly reminiscent of the first stage of protests in the neopatrimonial regimes of Equatorial Africa, and, if the economic recession drags on for several years, may potentially lead to a political crisis. The success of the protests depends on the groups which take part in them. For example, the protest potential of state employees is limited: state employees are completely dependent on the state, and the old trade union culture of the public sector tends to suppress those who “stick out”. Neopatrimonial states, based on the redistribution of wealth, do not produce the conditions for the protection of property rights, and the redistribution of state-owned corporations, excessive state regulation and corruption hinder economic development. In such systems, therefore, business and the middle class show solidarity with protest movements, which increases their chance of success. A similar trend is also being observed in Russia. Data from the Center for Economic and Political Reforms shows qualitative changes in the protest potential of Russian society in comparison with 2011-2012, such as the significant expansion of its social base, including the integration of businessmen (17%). The recent public protest by businessmen at the Moscow Economic Forum, and the subsequent public reaction, is an illustration of this. The regime’s swift reaction – the co-option of a businessman and the authorities’ searing criticism of Dmitry Potapenko in the pro-Kremlin party “Right Cause”- is a sign that the regime is well aware of the threat and is trying to prevent business merging with the unsystematic opposition.

However, the uniqueness of the current situation in Russia is such that the government can no longer afford to placate even state employees.  “Regions will have to act very carefully”, says the director of the Center for Political Information, Aleksei Mukhin. “The current crisis has a strong media character.  The conversations are about how bad it is and how it will only get worse. In such conditions, any unpopular actions on the part of the regime almost leads to panic. Now if the authorities want to slash some sort of social benefits, then they will need to literally consult with the population.”

The critical blow to the service economy has also had other consequences, because a significant part of the workforce in this sector are people from the provinces. The deterioration of the market situation may lead to inverse internal migration: when people lose their jobs, they will return to their home towns, where the cost of living is significantly less. In fact, such a wave may lead to the expansion of the geographical and social group of those expressing discontent, and also, given the proximity of elections, this may also lead to the expansion of protest vote zones.

Because of a combination of factors, sociologists predict that within a year and a half, the regime’s approval rating may fall considerably, and Russians’ latent discontent with their status will grow, which may lead to a wave of protest actions. It seems that the authorities are preparing for such a version of events.

This is an uncut version of the article that first appeared on Vedomosti site.