Highlights of the Free Russia Foundation achievements in 2018.

A few weeks ago, Free Russia Foundation celebrated four years since its founding.

At its start, there was a human tragedy — a group of young hard-working patriotic Russians who had abruptly lost their homes, had to say hasty goodbyes to their families, and leave behind all their possessions. Their work toward a better future for Russia and the Russian people was seen as a threat by Putin’s regime, and for that they were forced into exile. This loss, however, didn’t demoralize them; quite the opposite— they realized that if they are ever to reclaim their homes, they had to continue their work and redouble their efforts.

In just a few years, Free Russia Foundation has grown into a powerful global movement. Today it connects thousands of talented professionals, entrepreneurs, thinkers, scholars, policy-makers and activists inside Russia, but also in Europe including Ukraine, in the United States, Canada, Israel and Asia. What binds them together is their shared belief that a Free Russia— democratic, prosperous, peaceful— is not only a realistic and achievable vision, but is the prerequisite for a secure and flourishing international community. It is their readiness to commit personal resources, skills, knowledge, creativity, and time to our shared cause that has fueled the successes at Free Russia Foundation.

2018, in that regard has been an exciting and fulfilling year:

We have published three major studies: deconstructing Kremlin’s hybrid warfare; taking stock of the disastrous results of Putin’s rule; and setting forth a plan on how to make Russia a more free and democratic country.

The last report, Constitution and Economy After Putin. A Roadmap for a New Russia coauthored by  Vladimir Milov, Andrey Medushevsky and Ilya Zaslavskiy is of special significance as it is the first formal effort by the Russian opposition to articulate a platform alternative to that offered by the Putin regime as the only available option. We have presented the recommendations  of this report at the Chatham House (London, UK), the Wilfried Martens Center (Brussels, Belgium) and at the DGAP (Berlin, Germany). The value of this report is not only in the concrete reforms and positions that it espouses, but also in the very process of engaging various Russian pro-democracy forces in open and detailed policy deliberations while identifying common ground and areas for compromise, akin to the Federalist Papers that paved the road to the U.S. Constitution. We will seek to continue and expand this effort, with follow-on installments expected in 2019. 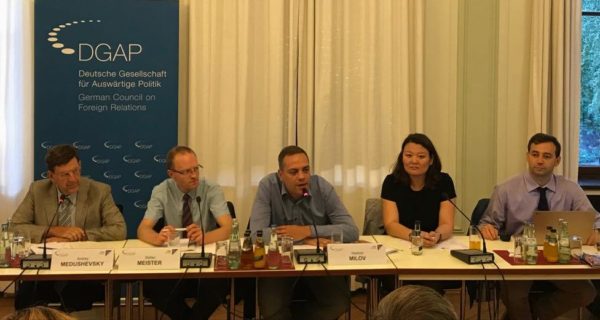 We are currently nearing completion of another future-oriented project—Russian Scenarios 2030. As part of this effort, prominent Russian experts, including Vasilyi Gatov, Aleksandr Morozov, Vladimir Milov, Ilya Zaslavsky, Denis Sokolov, and Vladislav Inozemtsev have conceived over a dozen scenarios —featuring energy, economic sanctions, military campaigns, coups and other factors as drivers of discontinuity— that might prompt an unraveling in Russian society over the next decade. We look forward to sharing the fruits of this exciting project in the first quarter of 2019. And our international team of experts is currently working on another in-depth research project focused on the Kremlin’s attack on the rule of law in the West.

We have conducted dozens of briefings, training sessions and workshops in Washington, DC, Kyiv, Brussels, Prague and Tallinn, involving hundreds of legislators, policymakers, officials, journalists and civil society leaders. Our U.S. Congress Series established in early 2018 has educated hundreds of key members and their professional staff from the U.S. House of Representatives and the Senate on a range of critical yet relatively unexamined issues, such as the protest movements, decentralization trends, and military campaigns. Engaging key “Russia hands” in a private informal environment and connecting them to top expertise and current events from inside Russia, this program has managed to build a faithful following. As a testament to the success of this series, Free Russia Foundation has been invited to establish a similar program at the European Parliament in Brussels, and we expect to host our kick-off event in the Spring of 2019. As Putin’s regime is working tirelessly to reshape Europe to its advantage by corrupting its institutions and eroding its democratic consensus, educating and mobilizing European legislators and the community at large is an important and urgent task.

In 2018, Free Russia Foundation hosted sixteen delegations, groups and individuals from Russia or from among exiled Russians in Europe, highlighting and enhancing our status as the informal embassy of the Russian pro-democracy forces in Washington, DC. In May, 2018, with support of the Henry M. Jackson Foundation and in partnership with the Open World Leadership Center funded by the U.S. Library of Congress, we brought to the U.S. a delegation of the new generation of democratic leaders elected into municipal governments in Russia in 2017, those set to run in the upcoming local elections and local governance experts.  Through conferences, private meetings and briefings, the participants of this delegation and their U.S. hosts and audiences not only exchanged critical information, know-how and professional insights, but what’s more important, infused each other with enthusiasm — witnessing the Russian young leaders committed to democracy and good governance and their Western counterparts ready to lend support and guidance.

As has been the case from day one of Free Russia Foundation, in the past year we dedicated a great share of our organizational effort to Russian activists whose lives have been put in danger because of government persecution and Tragically, Russia has continued down its spiral of oppression and authoritarianism, stifling independent voices by threats, imprisonment, and murder. As part of its “Activism Without Borders,” Free Russia Foundation offers emergency assistance to journalists, civil activists, minorities suffering harassment by Putin’s regime. This program also empowers exiled Russian scholars, activists and investigative journalists to continue their Russia-related research or investigations. Free Russia Foundation arranges placement of these activists for six-month fellowships at leading Ukrainian, European, U.S. and international NGOs, think tanks, universities or media outlets.

To send a strong message to the Russian government that its crimes have no expiration date and will meet with a reckoning sooner or later, we have worked successfully with Vladimir Kara-Murza to memorialize the slain Russian opposition leader Boris Nemtsov by re-naming as Nemtsov Plaza a location adjacent to Russian Embassy facilities in Washington, D.C. and by naming the Nemtsov Square in Kyiv. 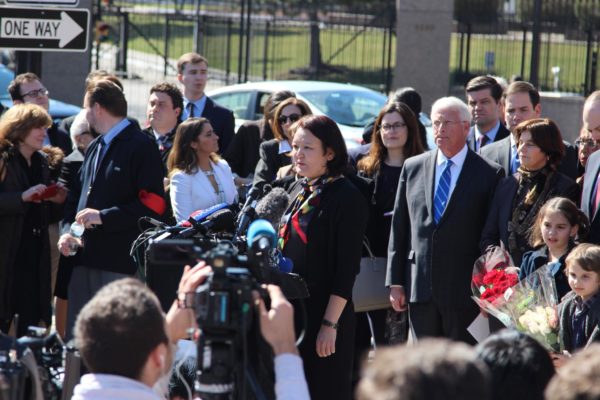 In August, our Kyiv office organized a five-day Action Institute training course on nonviolent resistance gathering 40 participants from ten post-Soviet countries. This initiative was conducted in cooperation with the International Center for Nonviolent Conflict, the Taurida National University and the Laboratory of Democratic Transformations. Our other Kyiv office programs included a week-long human rights film festival “Refraction” in partnership with People in Need, Amnesty International, Hromadske TV and Crimean House, which was attended by 400 people; work on the project “Last Address” to commemorate victims of the Communist regime; and dozens of discussion panels on various urgent topics including the Kremlin’s repressive domestic policies or aggressive foreign

To accommodate our expanding programs and activities, we have expanded our Headquarters at the Ronald Reagan Building in Washington, DC, adding both space and staff.

In late December 2018, we convened a newly-formed Board of Directors comprised of distinguished foreign policy leaders. Hon. David J. Kramer, former Assistant Secretary of State for Democracy, Human Rights and Labor and current Senior Fellow at the Vaclav Havel Program for Human Rights and Diplomacy at Florida International University’s Green School of International and Public Affairs, was elected Board Chairman, and Hon. Paige Alexander, Executive Director for European Cooperative for Rural Development, former USAID Assistant Administrator for Europe and Eurasia and former USAID Assistant Administrator for the Middle East, was voted Vice Chair of the foundation.

We established a West Coast liaison office in California focused on engagement with high-tech industries and entrepreneurs.

We established a permanent Regional Office in Kyiv, Ukraine.

We are planning to open a Regional Office in Tbilisi, Georgia in early 2019.

We have began exploring options for offices in Berlin, Germany and Paris, France.

As we take stock of all that has been achieved this year, we see that much more remains to be done. What gives us a great sense of optimism and confidence in our success is the immense support we receive from our friends, partners, volunteers, funders. To us, as a nongovernment non-profit, literally every dollar, each hour, every piece of advice and task performed pro bono take us further toward our vision of Free Russia. We thank you and look forward to continuing our work together.