Dec 14, 2016
Russia’s Likely to Interfere in French and German Elections Next

Cultivating political connections with allies in Europe is a key part of Putin’s influence strategy.

The U.S. Central Intelligence Agency has reportedly concluded that Russia intervened in the U.S. election with the aim of helping Donald Trump win the presidency. While Russia’s meddling in American politics may come as a shock to some, such tactics have been part and parcel of the Kremlin’s influence strategy in the post-socialist space and increasingly in Western democracies for a while now under President Vladimir Putin.

As Putin seeks to reaffirm Russia’s place in the world, cultivating political connections with allies in the West is key to his influence strategy. Now that Trump won, the Kremlin will likely accelerate its overtures toward populist candidates who are critical of NATO, the European Union and the U.S. ― all of which Russia views as threats. And the populists will be, as they have been, more than happy to return the affection.

The Kremlin has been churning out propaganda supporting European populists through state-sponsored media (RT and Sputnik), internet trolls and fake news creators. While the documented funding of trolls and fake news creators is more opaque, since Putin’s been in power, Russia has openly funneled millions towards RT and Sputnik, which both operate in multiple European languages. Just this week, RT received $19 million from the Russian government in order to start a French-language channel. These disinformation propaganda tools are reminiscent of the “active measures” that the Soviet Union took to infiltrate and manipulate Western politics in the Cold War era.

And then, of course, there’s hacking. Germany’s domestic intelligence agency said last week that Russia is undermining the country’s upcoming fall election with increasing cyber attacks and cyber spying. The head of the agency said that material hacked from the German Parliament, published recently by WikiLeaks, came from the same Russian group that hacked the U.S. Democratic National Committee.

Russia will likely accelerate its overtures toward populist leaders who are critical of NATO, the EU and the U.S. — all of which Russia views as threats.

Populism would be rising in Europe on its own without Russia’s support, due to a variety of reasons. But Russia’s support is evident. Russian flags wave high at Germany’s anti-Islam PEGIDA rallies while the Russian state-sponsored media regularly broadcasts live coverage of the movement’s demonstrations. And Germany’s euroskeptic Alternative for Germany party’s youth wing has formed an alliance with Putin’s United Russia party’s youth movement.

Meanwhile, in France, intelligence officials also claim Russia may be interfering in its own upcoming election, which will be held in April. The leader of France’s far-right National Front party, Marine Le Pen, is a darling of the Russian state-sponsored media and is received at the highest levels of the Kremlin. In 2014, a Moscow-based bank funded the National Front with a 9 million euro loan, and this year, Le Pen publicly asked Russia for an additional 27 million euro loan.

And Le Pen is returning the love, hailing Putin as a patriot and defender of common Christian values. She has praised Russia’s brutal intervention in Syria, blaming the escalation in the conflict on the EU while commending Russia’s bombing campaigns, which have contributed to massive civilian bloodshed and have exacerbated Europe’s refugee crisis. The National Front also ardently supported Putin’s annexation of Crimea in 2014 – an act not recognized by any international body or Western country.

These disinformation propaganda tools are reminiscent of the ‘active measures’ that the Soviet Union took to infiltrate and manipulate Western politics in the Cold War era.

The Kremlin has also aligned itself with populist candidates and parties in Italy, the U.K., Austria, Bulgaria and beyond. Hungary’s far-right party’s member of the European Parliament, Bela Kovacs, is even under investigation for allegedly spying for the Russians, earning him the nickname “KGBela.”

European leaders must not stand by while a malign foreign government seeks to interfere in domestic politics. Western democracies cannot beat an authoritarian regime at its own game, nor should they. A response to Russian influence in politics should thus be grounded in Western values of openness and transparency. European governments and the EU should take the following steps to get ahead of Russia’s interfering:

Investigative work is costly, and independent media in the West is already under threat. To support the work of independent organizations, the EU should establish a counter-influence task force that would coordinate the work of intelligence agencies and function as an information hub by releasing declassified research to civil society groups. 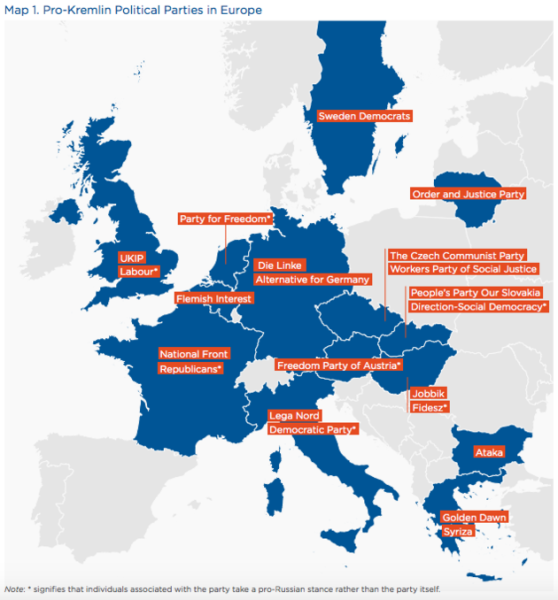 The European Commission should establish and allocate funds to a new independent agency, backed by financial regulators, with a mandate to expose financial links between the Kremlin and European political groups and to counter information warfare. In the United States, U.S. Senators Rob Portman (R-Ohio) and Chris Murphy (D-Conn.) have proposed a bipartisan bill, the Countering Disinformation and Propaganda Act, which would establish an interagency center to coordinate counter-propaganda efforts. This legislation is an important starting point.

3. Impose penalties on those who willingly facilitate corruption and kleptocracy.

Putin has established a kleptocracy that allows those close to the Kremlin to reap incredible wealth, which is then invested in Western banks and shell companies and, at times, used to fund pro-Kremlin political groups. Financial regulators in the EU lack the teeth to penalize these complicit banks and financial institutions. So the kleptocracy grows.

This cycle of corruption and influence must be broken. European leaders must prevent known Russian kleptocrats from access to Western safe havens and must penalize companies and individuals who use Western financial institutions for money laundering. This will require global cooperation and, in particular, financial intelligence sharing between the EU and the U.S.

While the West may not think it is in a new Cold War with Russia, that is how the Russian government sees it. But resurrecting Cold War era counter-influence operations will not be effective in this era of globally interconnected financial and informational networks. The Kremlin has adapted, and Western governments must do so as well, lest they be caught off guard by foreign influence.

This piece first appeared at the Huffington Post site.