Jan 03, 2020
The Overview of Relationships of Council of Europe and Russia

In 2019, Russia regained its status in the Parliamentary Assembly of the Council of Europe. This event caused many fears and sowed the seeds of doubt in the minds of observers and analysts. The team of the Free Russia Foundation reviewed the development of this challenging situation.

In April 2014, the Parliamentary Assembly of the Council of Europe adopted Resolution 1990 (2014). This Resolution noted the facts of significant violations of the basic norms of international law by Russia. In particular, the Resolution states that:

The Assembly believes that by violating the sovereignty and territorial integrity of Ukraine, Russia has created a threat to stability and peace in Europe. The annexation of Crimea and the steps leading to it have set a pattern which is now being followed by other parts of Ukraine, as demonstrated by the developments in Donetsk, Kharkiv and Lugansk since the first week of April. The Assembly is particularly concerned by the position taken by the members of both chambers of the Russian Parliament at different stages of the process of annexation, including the unanimous vote in the Council of the Federation authorizing the use of military force in Ukraine, the approval of constitutional amendments allowing for the annexation of Crimea and the ratification of the illegal treaty on unification.

As a result, the General Assembly concludes:

– right to be represented in the Bureau of the Assembly, the Presidential Committee and the Standing Committee;

This status lasted until 2019. It was reasonable since Russia did not stop the occupation of Crimea, continued to commit acts of military aggression, and systematically violated fundamental human rights.

– release the 24 Ukrainian sailors captured in the Kerch Strait on the charge of “illegally crossing the border of the Russian Federation”;

– immediately pay all fees due to the Council of Europe budget;

– unconditionally and fully co-operate with the joint investigation team and the Dutch prosecution service in bringing those responsible for the downing of Malaysia Airlines Flight MH17 to justice;

– take effective measures aimed at preventing violations of the human rights of lesbian, gay, bisexual, transgender and intersex (LGBTI) people, in particular in the Chechen Republic, and prosecute the perpetrators for acts committed in the past;

– co-operate fully with the international community in the investigation of the murder of Boris Nemtsov;

– co-operate fully with all human rights monitoring agencies and enable their complete and unfettered access to all locations in which Russia has operational activities.

As we can see, at the moment Russia has fulfilled only the first two points.

We can find the main reasons for making such a decision in the text of the Resolution. The main difference between 2019 and previous years was that the term of office of key officials of the Council of Europe expired this year: the Secretary-General and judges of the European Court of Human Rights (ECHR). The appointment of these persons without the participation of the Russian delegation would significantly reduce the level of legitimacy of the institutions of the Council of Europe. It would provide very compelling reasons for Russia to leave the organisation.

An important reason was that Russia – in protest – refused to pay fees due to the Council of Europe.

Moreover, Russia’s potential withdrawal from the ECHR will significantly worsen the human rights crisis in Russia.

The return of authority of the Russian delegation was successfully used by the Russian propaganda machine and enthusiastically received by Russian officials.

In Ukraine, the adoption of the Resolution was assessed as “revenge of the aggressor” and almost all prominent political actors spoke out condemning this act. The Ukrainian parliamentary delegation together with the Georgian delegation is trying to start the process of appealing the Resolution.

As noted in the report: “The huge number of applications against Russia (over 11,700) should be highlighted in the current context at the Council of Europe. This massive influx bears witness to the trust placed by Russian nationals in the European mechanism for human rights protection and the importance which they attach to it.” 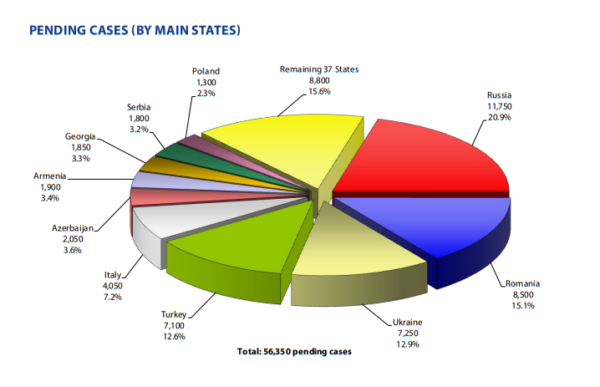 Information on the amount of funds paid to injured persons can be obtained from Annual Reports of the Committee of Ministers.

According to the Report of the Committee of Ministers, Russia continues to be the leader in the number of unfulfilled decisions: there are 1585 of them. Turkey (1237), Ukraine (923) and Romania (309) follow. 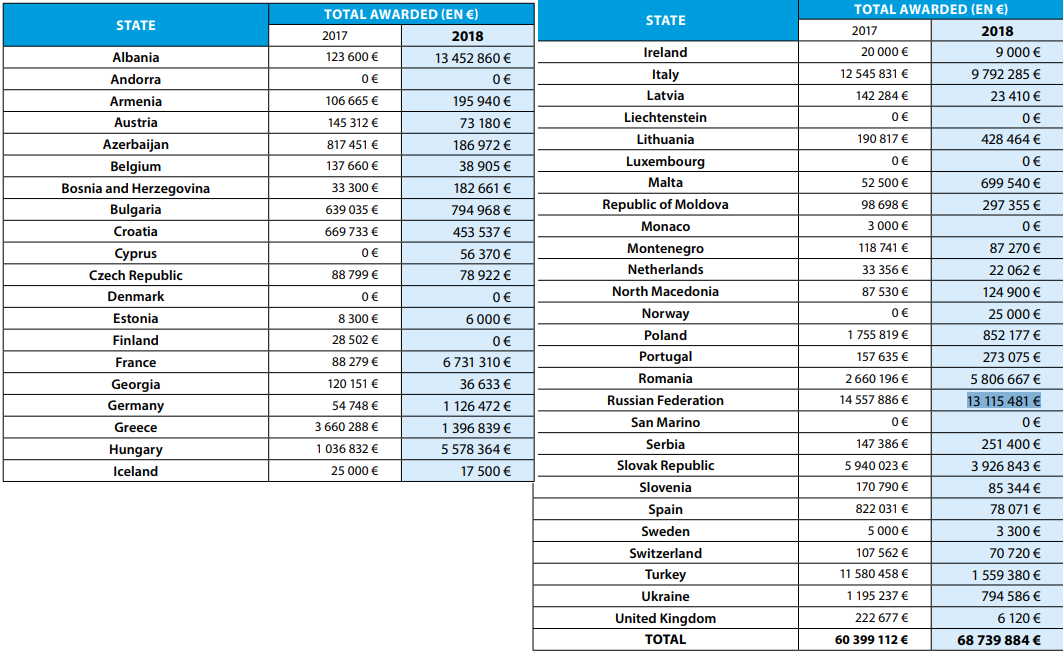 Reports indicate that Russia often avoids fulfilling its obligations to change its legal system. However, there are positive examples. A special report was issued on 20 cases that influenced the development of the legal system of the Russian Federation.

On the whole, the number of closed cases, in which decisions were executed, decreased by almost 1000 in 2018. The situation with the non-enforcement of judgments of the ECHR in the cases of Yukos, Navalny, Ofitserov, and Pichugin requires action at the highest level.

According to experts of the federal chamber of lawyers of the Russian Federation, the report is silent about most of the pressing problems of law enforcement practice, which Russia does not seek to correct, despite the availability of relevant decisions from the ECHR. The main problem is that Russia is not taking steps to change its legal system and the practice of mass and systematic torture, violations of the right to freedom of assembly, the right to access to justice, and other fundamental rights, including the right to life, are only expanding. The Committee of Ministers cannot force Russia to fulfill its obligations.