The failed military coup in Turkey, regardless of who actually orchestrated it, will likely have dramatic consequences for the Turkish Republic and its people.

Ever since Mustafa Kemal Ataturk founded the modern Turkish state in 1923, Turkey has been repeatedly seesawed between the secular ideology of the state known as Kemalism and some form of Islamism. Turkey’s predecessor, the Ottoman Empire, was an Islamic Empire. But when Ataturk took over, he radically reformed the country into a secular, democratic state. Rallying cries like “Long Live the Sultan/Sheikh” were replaced with “How happy is the one who says “I am Turkish.”

Despite the secular nature of the Turkish Republic, much of Turkey’s 80 million people outside the large cities are conservative Muslims who desire a return to traditional values, and Islamist parties have risen to power before. The Turkish Armed Forces, however, see themselves as the defenders of the secular ideology of the Turkish Republic and have intervened multiple times. Islamism and Islamist politicians have been met with little tolerance by the Armed Forces.

President Recep Tayyip Erdogan, who has been in power since 2002, is an Islamist. Since coming to power his government, which enjoys broad support from the Turkish countryside, has been chipping away at Turkey’s secular democracy by increasing the role of religion in the government and his critics have referred to him many times as a “Sultan” in mocking terms.

It shouldn’t be a surprise that the military and Erdogan would butt heads, but Erdogan seemed to be aware of that long before coming to power. The military coup of 1980 which led to three years of military rule and the 1997 military intervention that led to the forced resignation of Prime Minister Erbakan are still fresh in the minds of the Turkish people. Erdogan was a member of the now-defunct Welfare Party when Erbakan was forced out of office.

Under Erdogan’s government, pressure has been applied to the army leadership and Kemalist generals have been dismissed and replaced by Erdogan loyalists.

Then the situation exploded. On the 15th of July, last Friday, the military abruptly closed two of Istanbul’s bridges between Europe and Asia and deployed into the Turkish capital of Ankara. The state broadcaster TRT was sieged and helicopters flew low over the capital near the Parliament building. And yet, by the morning it became clear that their coup was doomed to failure.

While the army plays an important role in Turkey as the first line of national defense and the guardianship of the secular state, it’s clear it was poorly planned. A military coup is a serious and very responsible matter. As the saying goes: a rebellion is never successful, a successful rebellion isn’t called a rebellion.

First of all, the officers who started the revolt did not have a practical mechanism to take power. Neither the president nor the prime minister were  arrested or even blocked. And even though Erdogan could not land at the airport, he kept in touch with the government. Prime Minister Yildirim handed disposal of loyal security officials, speaking to the public and journalists, calling on supporters to take action. In fact, the military was not able to take control of any one key institution:  the TRT offices and the Parliament suffered blows, but they had no practical value, so it only angered the people.

Soldiers called in to take part in this coup attempt were not properly informed as to what was happening and their morale was low. When they faced resistance, they dropped their weapons and surrendered.

Secondly, the organizers of uprising clearly did not have the social base. The leaders of the rebels had not prepared public opinion and relied solely on strength.  As a result, armed action was not supported by any significant socio-political force, and even opponents of Erdogan, including every other party in the Turkish parliament, opposed the forcible seizure of power.

The same position was taken by the UN leadership and Western countries, including the United States. In defense of Erdogan, thousands of people stood in front of tanks and tried to disarm the soldiers. Shooting into crowds of unarmed protesters automatically gave Erdogan a sense of moral superiority.

There is no conspiracy in such events, but the bottom line is a failed coup that will only play into the hands of Erdogan.  This revolt gives Erdogan a reason to move Turkey towards a presidential system of democracy, one that would give him more power and one he has openly expressed support for. It also hurts the critics of Erdogan who weren’t involved in the coup.

Speaking to reporters at night, Erdogan said that for this incident he should thank Allah, for now there is nothing standing in his way to purge the Armed Forces. The leadership of the country has already started talking about amending the Constitution and reinstating the death penalty. At the same time, Erdogan earned an important political trump card: he was able to strengthen his personal power, but under the banner of the defense of democracy in the face of the junta.

The events of last night could be the most important episode in the history of modern Turkey. If Erdogan shows rigidity and consistency, he can reverse the role of the army as the guarantor of the Constitution, while reducing personal risks. Should this happen, Turkey could well start the process of revision of “conquest of Ataturk.” And this is a direct path to the return of a religious state. 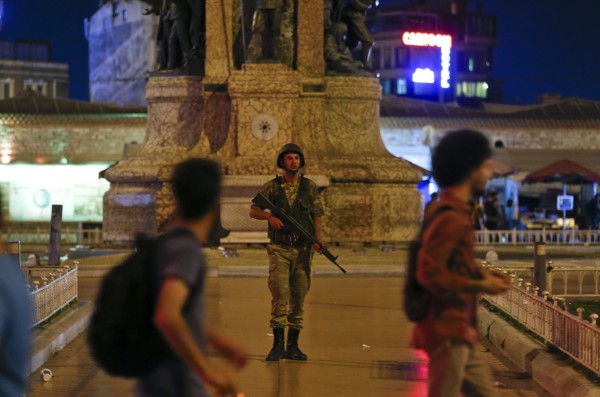 The Russian Army does not play an active role in Russian politics, in contrast to the Turkish military. The last time Russian officers tried to seriously affect the internal agenda of the government was in 1825, when part of the Decembrists brought guards to Senate Square, in order to prevent the coronation of Tsar Nicholas I.

However, developments in Turkey may well have consequences for our country. Despite the fact that the US president immediately expressed support for “the democratically elected leadership of Turkey”, the Kremlin’s propagandists are stubbornly yelling that the mutiny in Istanbul is connected to the United States. It is likely that the Russian leadership, long hopelessly paranoid, seriously believes that U.S. intelligence agencies are behind the Turkish mutiny attempt. At least it’s consistent since the Russian government is sincerely convinced that any unrest and upheaval in the world is caused by Americans.

And if so, what happened will be seen as a reason for the Kremlin to continue the policy of pressure on all aspects of society, to ensure loyalty to Putin’s government. Purges in the army, officers having their loyalty to the Kremlin looked into, and the preventive dismissal wave of denunciations – is likely the prospect of the immediate future for the Russian Armed Forces.