A special report by the EEAS on Coronavirus Disinformation offers a thorough analysis of tactics, strategies and vectors of effort by  Kremlin-controlled media on the issue of Coronavirus. During the past three months, the agency has documented over 110 instances of disinformation (i.e. excluding reposts and secondary materials citing them). Such a significant volume suggests that the Kremlin has a strategy and a plan on how to use the pandemic to advance its political agenda in Europe.

How is this strategy manifested and executed in Germany? And who are the prime targets for the Kremlin-controlled media in Germany?

In Germany, there are in essence two main target audiences – the German-speakers and the Russian-speakers. A great volume of German-language materials is generated by outfits such as RT Deutschland и Sputnik DE. Their level of activity is so massive (for RT Deutschland, for example, – up to 10 new videos per day and for Sputnik DE up to 30 published stories per day) that the German law enforcement now has several formal efforts dedicated to addressing their challenge. In March 24, 2020, the Federal Criminal Police and the Federal Office for the Protection of the Constitution announced the start of programs to monitor fake news materials “whose spread may pose a threat to the societal order and security.”

Organic audiences (in German Top-100 in social nets) cultivated by RT and Sputnik as part of Russian campaigns to interfere in the EU in 2019 and German Parliamentary elections in 2017, today are used to spread the coronavirus disinformation throughout the German society. For the most part, they are people with far-right political orientations, those who support populist leaders, harbor anti-American sentiments and embrace conspiracy theories of various sorts.  Many of them have voted for the AfD party. This is not surprising, given that RT served as a de-facto party channel during the 2017 Bundestag elections campaign – it provided AfD candidates unrestricted publicity with an opportunity to discuss any issue, while completely ignoring all other parties and candidates.

Germany’s Russian-speaking community, of course, is also an important audience for the Kremlin propaganda outlets.  According to various statistics, Germany is home to between 3-5 mln Russian-speakers:

– About 3 mln arrived through the repatriation programs for Soviet Germans;
– About 300,000— are refugees of Jewish ethnic origins;
– About 300,000 ethnic Ukrainians;
– According to the official information published by the Russian Embassy in Germany — 500,000 remain citizens of the Russian Federation;
– Additionally, citizens from various former Soviet republics such as Moldova, Latvia, etc.

This amounts to a sizeable audience for whom Russian is the primary language used at home, as well as the main language for receiving important information and the news.

In addition to the Russian-language media outlets, the Kremlin aggressively employs social media platforms to shape opinion among the Russian-speaking audience in Germany. The Russian Odnoklassniki (translates as “classmates”) has at least 2.6 mln accounts based from Germany;  an online group “Russian Germans for AfD” has over 20,000 members; and the pro-AfD and pro-Putin group “Russian Germany” has more than 60,000 members.

Four narratives dominate within the continuous barrage of coronavirus-related disinformation and manipulation advanced by the Kremlin-controlled media in Germany:

1. Lack of unity in Europe and the absence of collective support and plan dealing with the coronavirus among the EU states. 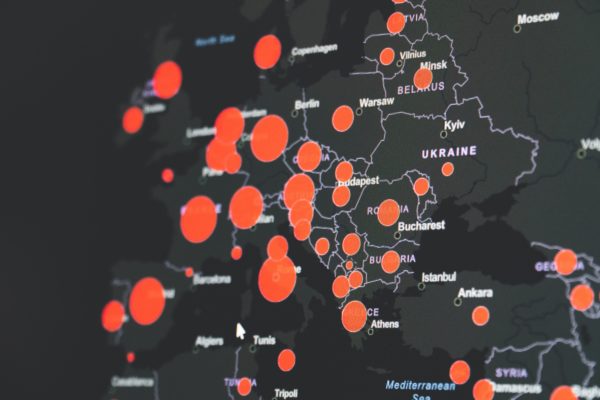 In a weekly program Vesti Nedeli (which has about 5.7 mln viewers) broadcast by Russia’s First Channel on March 22, 2020, Dmitry Kiselev is speculating on the geostrategic ramifications of the COVID-19 pandemic:

“The Schengen Area regime was the first one to collapse.  Germany, Switzerland, Austria, Hungary, the Czech Republic, Denmark, Poland and Lithuania have reinstated control of their national borders. That means that the Schengen Area with the freedom of movement between its 26 members states no longer exists. Those are just the first few steps in the direction of giving up the spoils of civilization in favor of reinstating sovereign nation-states. In fact, this is the crash of the European Idea and transition to a new political culture with a different value system.

All the lip-service to solidarity, collective assistance, shared values, human rights and humanism, has gone with the wind the moment when Italy, who lost more people to coronavirus than China, asked the EU for help, and was rebuffed. Italy requested personal protection items and medical equipment, specifically lung ventilators. In response, Germany and France curbed their exports of medical masks.”

One would be hard-pressed to find “analysis” with a comparable concentration of lies.  Firstly, the Schengen agreements include clauses governing possible limitations and temporary moratoriums on travel, as well as governing the travel of non-EU citizens. Secondly, the European Commission urgently appropriated 50 million euros to help Italy.  Finally, France and Germany limited their national exports of medical masks due to their domestic deficits.

Similar materials and reports surfaced on the German-language Sputnik DE on March 19, 2020 and RT Deutschland on March 30, 2020. Some outlets have gone further and proclaimed the end of the European Union.

Alexander Nosovich commented in his March 13, 2020 editorial published by RuBaltic.Ru: “The Coronavirus response has demonstrated that the European Union does not exist in the minds of Europeans. When it is time to act, the Union ceases to exists as a political reality.”

VestiFM (ВестиFM) went even further and in all seriousness discussed the inevitable exit of Italy and Germany from the EU.

The nexus between the German right populists politicians and the Russian medical envoy to Italy deserve a special mention, as it played a key role in Putin’s decision to do so.

Turns out, the impetus was the March 20, 2020 letter penned by the Bundestag AfD member Ulrich Oehme (infamous for his pro-Russian stance and his travel to the occupied Crimea) and his Italian colleague, ultra-right populist from the Lega Nord party Paolo Grimoldi (who founded a “Friends of Putin” Caucus in the Italian Parliament) addressed to Roman Babayan (a Moscow City Duma Deputy and an anchorman of the NTV show “Your Own Truth”) and to Leonid Slutskiy (Chair of the Duma Foreign Affairs Committee, PACE delegate, member of the Russian right-wing Liberal-Democratic Partyparty, and named on the international list of sanctions adopted by the US, EU and Canada for his official legislative role in the Russian annexation of Crimea).

Babayan read the letter during a live broadcast of his show, which received wide coverage throughout the Russian media. For the Russian audience, a spectacle was played out where a teary plea from the Europeans was met with an immediate and gracious response from Russia.  It’s important to acknowledge that this narrative may be aimed more at the Russian domestic audience, as opposed to the Russian diaspora in Europe, though it permeates both.

2. Germany moves to rescind sanctions against Russia due to the pandemic.

Calls by three marginal Bundestag Members – Robby Schlund, AfD (who became famous for his effort to open an AfD office in Russia), Anton Friesen, AfD, and Alexander Noy, Left – are presented by the Kremlin media as the onset of a serious discussion to end sanctions against Russia. It has been peddled most actively by RIA News and Izvestia (and then reprinted by dozens of less prominent outlets such as regnum.ru, Rossiyskaya Gazeta, gazeta.ru and among the German-language outlets, such as  Sputnik, RT and Junge Welt who also touted that the tiny German Communist Party called to end sanctions against Cuba, Venezuela and Russia. It is important to clarify that such statements and calls are made by individual members of the Bundestag and fractions several times a day and do not amount to a formal legislative discussion or movement.

Against this backdrop, a significant reactivation of the Nord Stream 2 lobbying efforts have taken place. The pretext of this campaign was the publication of survey results prepared by Forsa, a leading German market research and opinion poll agency, and dealing with German attitudes on energy policy issues. Rossiyskaya Gazeta, whose editorial focus usually echoes the sentiments inside the Kremlin, immediately reported on the study: “Against the difficult economic situation related to coronavirus, the support for construction of the Nord Stream 2 pipeline has grown. Three quarters of respondents (77%) support the most expedient completion of the Russian-European project, despite the limitations announced by the United States.”

In Germany itself, however, this information has been ignored by prime outlets and only featured only by marginal portals covering economic beats (such as finanzen.net.)

3. German lack of preparedness for the Coronavirus pandemic and shortage of doctors.

One would assume that the Kremlin propaganda machine would not waste time on spreading lies that are easily factchecked and quickly dismissed as disinformation. Nevertheless, an entire program on Vesti FM on February 29, 2020, did exactly that. Other peddled themes include the so-called “negative pandemic scenario” projecting that 50 million Germans will inevitably become infected and 1 million will die, which at this point is a mere hypothesis. Some Russian outlets such as Nezavisimaya Gazeta engage in despicable speculation on the circumstances of the suicide of a German state minister with headlines such as “The German Hysteria”.  Again, here, it is the Russian domestic audience that may have been the primary target, though the Russian-language audiences in Europe have been also been affected.

While most Kremlin-controlled media outlets have advanced the narrative of the German panic, Alexander Rahr, the darling of the Russian propaganda and an expert on all possible issues, offered an extensive commentary: “ It is improper to say that one does not feel the panic here.”

Russian disinformation outlets have been pushing a narrative that refugees in Europe violate quarantine.  Komsomolskaya Pravda has hired an AfD activist  Eugen Schmidt who has churned out several reports supporting this theme. Such narratives target Russian audiences with anti-migrant and racists views.

An anti-migrant publication germania.one is also advancing a similar line. On the other hand, Sputnik DE is vocal in its criticism of the failure of the German government to sustain safety and enforce quarantine measures inside refugee camps and asylum-seekers’ housing.

What are some of the preliminary conclusions and observations that could be made from the review of the fake, half-truth and misleading materials?

It is clear that the Kremlin-controlled outlets seek to sow uncertainty, fear of the future and distrust among the German population toward its government. At the same time, materials aired and published frequently contradict each other.  RT Deutschland, for example, is criticizing the German government for harsh restrictions, while Sputnik DE is criticizing it for lack of preparedness and inability to enforce quarantine. However, this is precisely the mechanism used by the Kremlin to execute its strategy of sowing uncertainty and even panic. Once the environment is right, it aims to push for the removal of sanctions under the pretext of helping the German economy recover. To shift attention away from its own fake news, RT Deutschland is claiming  that prominent Western outlets such as Tagesspiegel , FAZ, AFP  и DW  are spreading fake news against RT Deutschland.

Despite all of these efforts by the Kremlin-controlled media, the rating of the ruling coalition continues to grow, and the majority of Germans approve of measures taken by state and federal governments. According to a recent poll conducted by ARD-Deutschlandtrend (02.04.2020), 72% are satisfied with the crisis management measures adopted by the government in response to coronavirus pandemic. Likewise, the support is strong for the overall performance of the ruling coalition of parties (government): 63% are satisfied with its work (which is a 28% from a similar poll 02.03.2020)